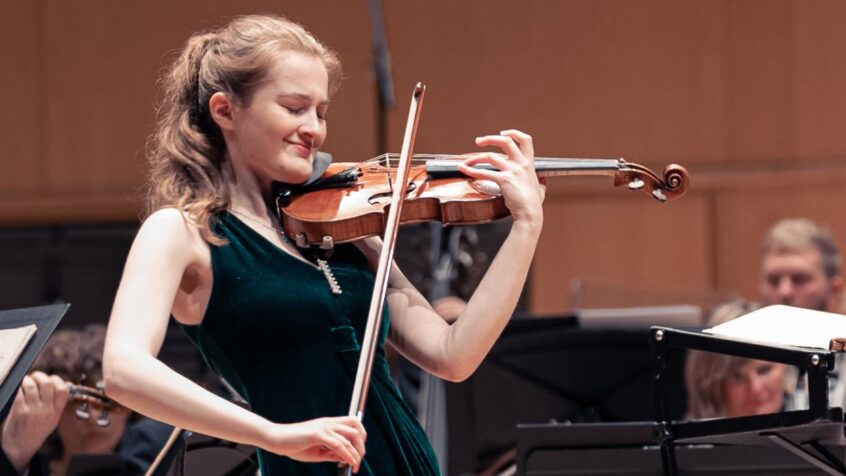 On 28 May 2022 Noa performed Mendelssohn’s Violin Concerto in E minor, Op. 64 with the Royal Scottish National Orchestra, conducted by Fabien Gabel, at the Glasgow Royal Concert Hall in Glasgow, UK.

The headline of this concert was supposed to be the Scottish premiere of Mark Simpson’s new violin concerto, written for and performed by Nicola Benedetti. Unfortunately, she had to cancel at short notice so that will have to wait. Happily, her replacement was much more than a consolation prize.

In a change of both performer and repertoire, Noa Wildschut, a young Dutch violinist, delivered a performance of Mendelssohn’s Violin Concerto in which everything worked.
Her approach to the violin is more lyrical than demonstrative, but that made Mendelssohn’s solo line flow and shimmer in a way that made it feel lighter than air.

Be it in the big thematic statements or the snatched half-notes that give the concerto much of its colour, hers was a performance full of honeyed legato and sensitive phrasing, especially in the gorgeous slow movement.

The directness of her communication with Fabien Gabel, the conductor, showed that they had exactly the same notion of where the concerto was going, and they shared it with the orchestra, which provided dramatic power in the first two movements and a finale that was as playful as a puppy chasing its tail. If you had cancelled your ticket because Benedetti withdrew, you missed a treat.

In the popularity stakes, stepping into Nicola Benedetti’s shoes is a tall order, and it was clear on Saturday that a tranche of her fans chose not to come once they learned she was ill and to be replaced by the young Dutch violinist Noa Wildschut. It’s possible the scheduled Scottish premiere of Mark Simpson’s Violin Concerto had already played a part in dissuading some of the faithful.

What they missed, however, was an enchanting and freshly considered performance of Mendelssohn’s Violin Concerto. Wildschut, who first appeared with the RSNO in 2020, allowed her endearing personality to quietly dominate, each sprightly physical gesture accompanied by instinctive musical thoughts ranging from the tenderest caress to the sparkiest bursts of rhythmic artillery.

Every gesture was marked by a generosity that enabled French conductor Fabien Gabel to draw out normally obscured, but symbolic features in the orchestral score. Suddenly, this well-trod concerto seemed so much more than we credit it for. There was also a charming imperfection about Wildschut’s performance, even a touch fragile in the opening bars, that won her audience over.